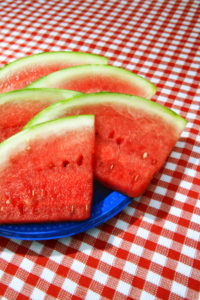 Whether you like to let the juice trickle down your chin or you’d rather have a seed-spitting contest, everybody loves eating melons during the summer months. You can find melons in just about every color, size, and flavor—some easily weigh 10 pounds, while others are “personal-sized.” Some have seeds; some don’t. There’s a melon for everybody!

Melons are split into two categories: watermelons and muskmelons. Watermelons are just that—watery. We tend to think of the word “watermelon” as being one specific kind of melon, but watermelons can be pink, red, yellow, or even orange inside. And “seedless” varieties still have seeds, actually, but they’re so tender and pale that they seem almost invisible. The three things watermelons do have in common is that they have a watery texture, they’re smooth-skinned, and their predominant flavor is sweetness.

Muskmelons include cantaloupe, honeydew, crenshaw, casaba, and all of the other dense-fleshed melons. Some of them have smooth skins, but many have netted or ridged skins. The flavor of muskmelons is more intense than watermelons—rather than just being sweet, muskmelons can have lemony and/or floral overtones. Just be sure to thoroughly scrub netted/ridged melons before cutting into them—dirt and bacteria like to lodge into those rough skins.

No matter what melon you choose, though, they’re sturdy, which is to say that you can cut them up in advance and then serve them in fruit salads, atop yogurt or ice cream, or paired with savory ingredients like cheese.

Place the onion in a bowl and cover with cold water. Let soak for at least 20 minutes, then rinse well and pat dry. This will take away some of the sulfuric acid and make the onions taste more mild and less “onion-y.”

In a large bowl, toss the watermelon with the red onion, mozzarella, and basil. Drizzle with balsamic vinegar and oil and toss well again. Keep chilled until serving.